How to Repair a Flooded Charleston Lawn 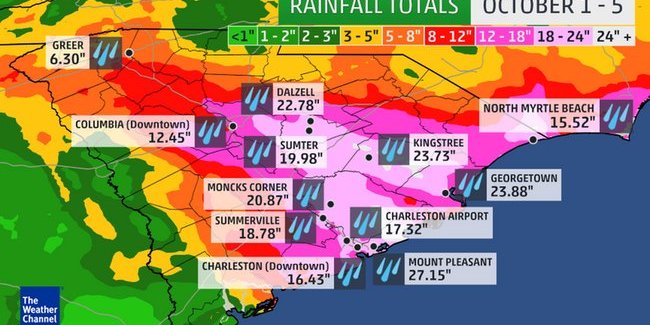 The recent historic flooding in South Carolina has left many Lowcountry lawns submerged. This is a precarious situation: Much of the inundated grass has been weakened, and weakened grass is susceptible to damage from fungus and grubs, which will proliferate for some time after the soil dries. Ultimately, some of the grass will die.

The prognosis for flooded lawns isn’t encouraging. Luckily, there’s enough time left in the growing season to repair the damage.

It’s important to remember that dead grass blocks the growth of live grass. Like tumors, areas of dead turf must be excised to allow growth of healthy sod. Dead areas should be dug up, filled with topsoil (filling-in areas that flooded is a good idea anyway), and resodded. (I recommend some type of zoysia.) The newly-sodded areas should be given an initial treatment of broad-spectrum fungicide, followed by a treatment of bifenthrin (a grub-killer) a couple of days later. A couple of days after that, the new sod should be treated with potash to promote parasite resistance and root growth.

Areas that survived submersion still face the prospect of an untimely death. These grasses have weakened immune systems and are ill-prepared to counter the intensified attack from fungus and grubs in the wake of the deluge. To have a better chance of survival, these areas should be aerated and treated with fungicide and bifenthrin, following the instructions above, to eliminate parasites. Later, they should be treated with potash to promote healthy immune systems and new root growth.

It’s important to note that potash, like most chemicals, is harmful when applied frequently. Treating a lawn with potash at the end of the growing season is a good idea, but an application of potash after the flood should be considered the final application of the year.

Good luck! May there be many sunny days ahead.

Hi, I’m Seth Mason, James Island native and owner and sole employee of Lowcountry Vistas Charleston Landscape Design and Installation. From the time I was 9 years old, I took pride in caring for my mother’s yard on the Island. The son of an artist and a lover of nature, making my mom’s yard look good became of a passion of mine at a young age. Years later, after having earned my M.B.A. during the 2008 Financial Crisis, I took part-time landscaping work to get by. In time, I came to realize that landscape design and installation was my calling: It combines my love of sculpting Charleston natural beauty, business acumen, and fresh air and sun. After earning my landscaping chops working alongside a fellow devotee to Charleston horticulture, I went on my own and started Lowcountry Vistas in 2015. Lowcountry Vistas is more than just a job to me. It’s a dream. I love improving peoples’ properties through my landscape design plans and landscape installations. Make sure to take advantage of my free consultation limited-time offer to learn more about what I can do for you!

The Importance Of A Native Lowcountry Landscape Designer
June 1, 2017